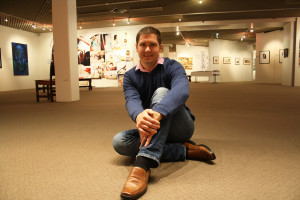 Please join us for the opening on Friday 15th of April - 1.00pm
The guest speaker will be ‘fellow’ Geoff Dobson from the Burnie Arts and Function Centre and Burnie Regional Art Gallery . Geoff will speak about his fantastic experiences as a Churchill recipient.

The Winston Churchill Memorial Trust was established in 1965 to manage the Fellowship award scheme. The Trust provides an opportunity for Australians to travel overseas to conduct research in their chosen field that is not already available in Australia. Over the 50 years that the Fellows have run, 191 Tasmanians have been awarded fellowships. This exhibition explores the enrichment a handful of these Fellows have brought to the Australian Community.  This is a touring exhibition from the Churchill Fellows’ Association of Tasmania, TMAG and QVMAG.

Come along to this exhibition. You never know, you or a family member might be a recipient one day. These winners are inspirational Tasmanians.

The Churchill Trust was established in April 1965. The principal object of the Trust is to perpetuate and honour the memory of Sir Winston Churchill by the award of travelling fellowships known as Churchill Fellowships.

The aim of the Churchill Trust is to give opportunity, by the provision of financial support, to Australians from all walks of life who, having exhausted opportunities within Australia, desire to further their search for excellence overseas. There are no prescribed qualifications, academic or otherwise, for the award of most Churchill Fellowships. Merit is the primary test, whether based on past achievements or demonstrated ability for future achievement in any walk of life. The benefit to Australia is a significant factor.

Churchill Fellowships have been awarded in just about every field imaginable. Some examples are:

A Churchill Fellowship benefits everyone and everyone is a winner! The individual because their determination, drive and dedication is recognised; their organisation because one of their number recognised for excellence, and Australia because the Churchill Fellow will return with skills and knowledge not readily attainable locally here. More information, including a listing of previous Tasmanian recipients, can be viewed here on the Churchill Fellows Association of Tasmania

In 1962 the Duke of Edinburgh asked Sir Winston Churchill, then aged 88, what memorial he would like to be established in his name. Churchill suggested something like the Rhodes Scholarships, but available to all with a much wider base. As a result of this request, a fund-raising exercise was organised with and was prepared to swing into action the moment Churchill died. Sir Winston Churchill died on the 24th January 1965 and the Churchill Memorial Appeal Day occurred on Sunday the 28th February 1965. On the day across all states in Australia, collectors called on homes. All monies collected on that day were banked on that day. banks opened especially for the Appeal Day. The Australian goal was £2.2 million and £4.5 million or the equivalent of $35.2 million in 2007 AUS dollars was raised. A total of 250,000 volunteers fanned out across Australia and knocked on about three million doors between 7pm and 9pm.
The Appeal was the biggest ever single-day fundraiser with 750,000 donation receipts issued on the day. Those funds collected in 1965 and wisely invested, have enabled Fellowships to be awarded in Australia.